Leofoto is a relatively newcomer in the very saturated market of tripod makers, offering tantalisingly low prices for good performance and added features to put a leg up against other more established competitors. Having a pretty awesome working review relationship with local dealer PhotosphereSG, they loaned me a copy of the Leofoto LS-284C tripod with the Leofoto NB-46 ball head for use as my go-to landscape kit for a few weeks. Aside from that, they also provided me with a few other Leofoto goodies that I will be reviewing later, so massive shout outs to them!

Those who are familiar with my shooting style know that I go for the most sturdy set-up whenever I can, which is why I lug around a beefy Really Right Stuff TVC-33 tripod for my urban landscape shenanigans. However, such a set-up can be ironically a pain to travel with considering the nature of my photography style. Though it may be light for its size, the TVC-33 is still bulky, which is why I've only brought it overseas (to New Zealand) once, where we had our own transport to get us to our landscape spots.

Enter the Leofoto LS-284C set of legs. At just 1.12kg and 44.4cm without a head attached, the carbon-fibre legs is very light and packs nicely into luggage or the padded tripod bag it came with. This 4-section tripod extends up to a decent working height of 120cm when fully splayed, and can be easily laid flat onto any surface due to its design which does not include a centre column by default. The centre column is still included in the kit, but one has to screw the column into the apex of the tripod since it isn't built into the design. For most landscape photographers, this is actually preferable as it does not compromise stability and allows you to quickly drop to a lower angle when needed. Check out more specs here at their product website. 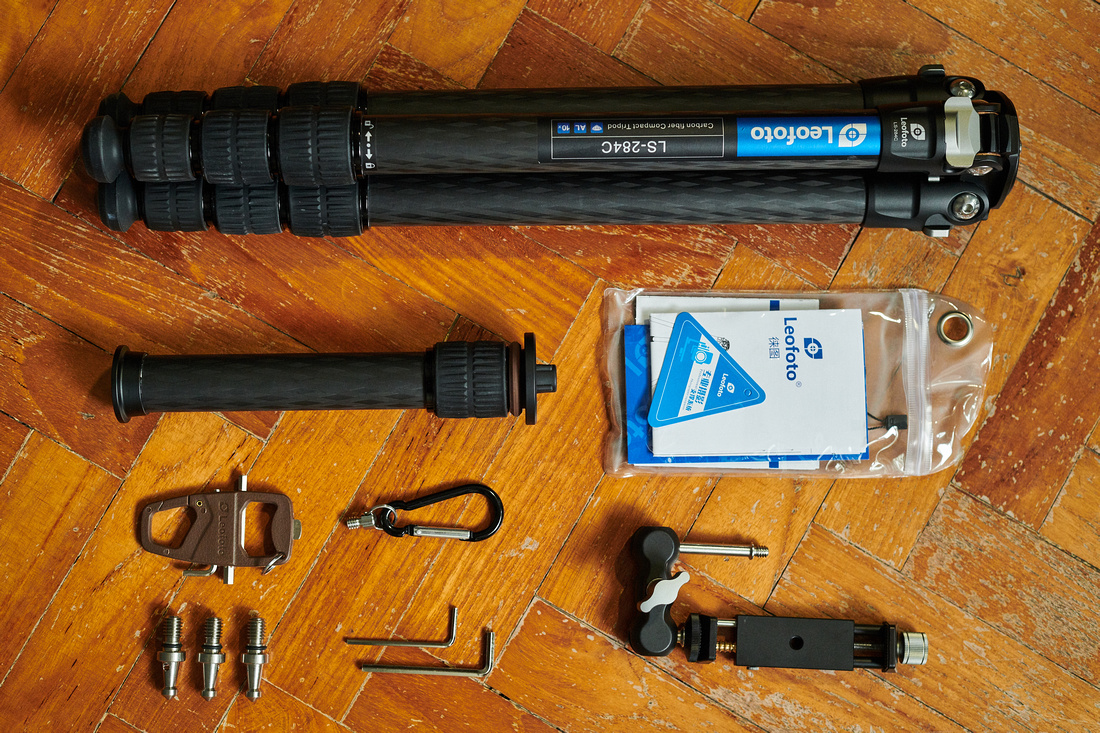 The tripod comes with the aforementioned detachable centre column, allen wrenches in a tool kit, a carabiner with a 1/4in screw attachment that you could attach to the underside or the side of the tripod's apex to hang your camera bag with or other accessories, and tripod leg spikes for use outdoors. The AM-2 magic arm with the PC-90 phone attachment on the bottom right is not part of the tripod kit, but can be purchased as a separate accessory. 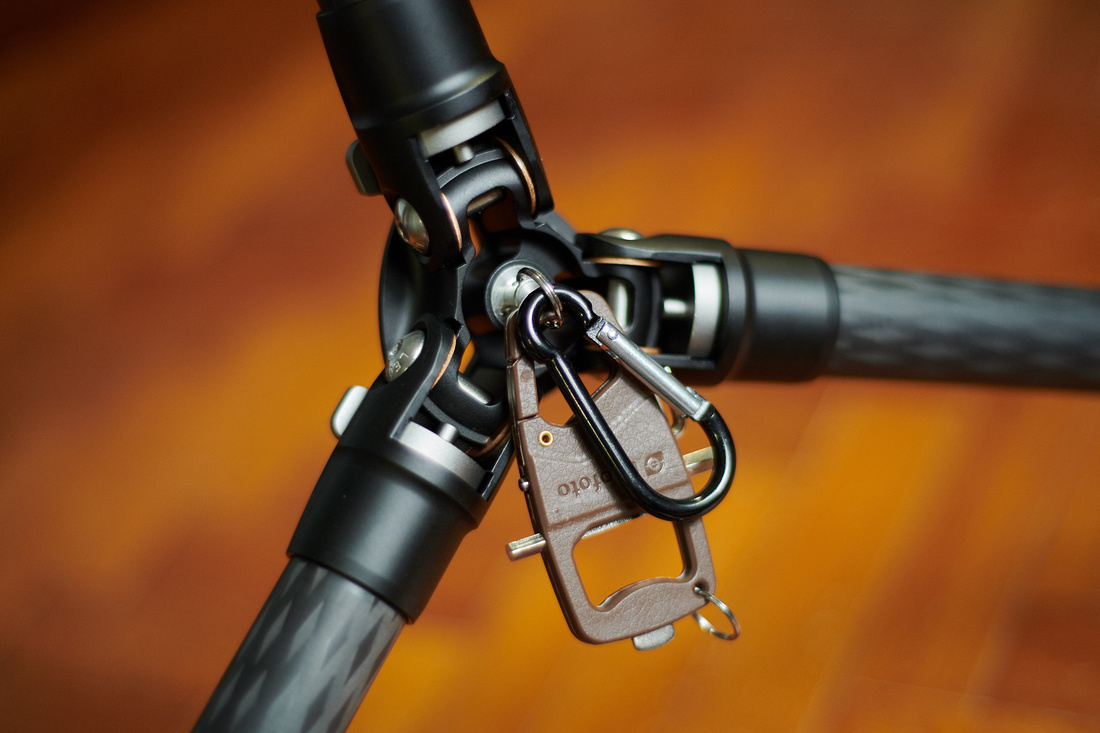 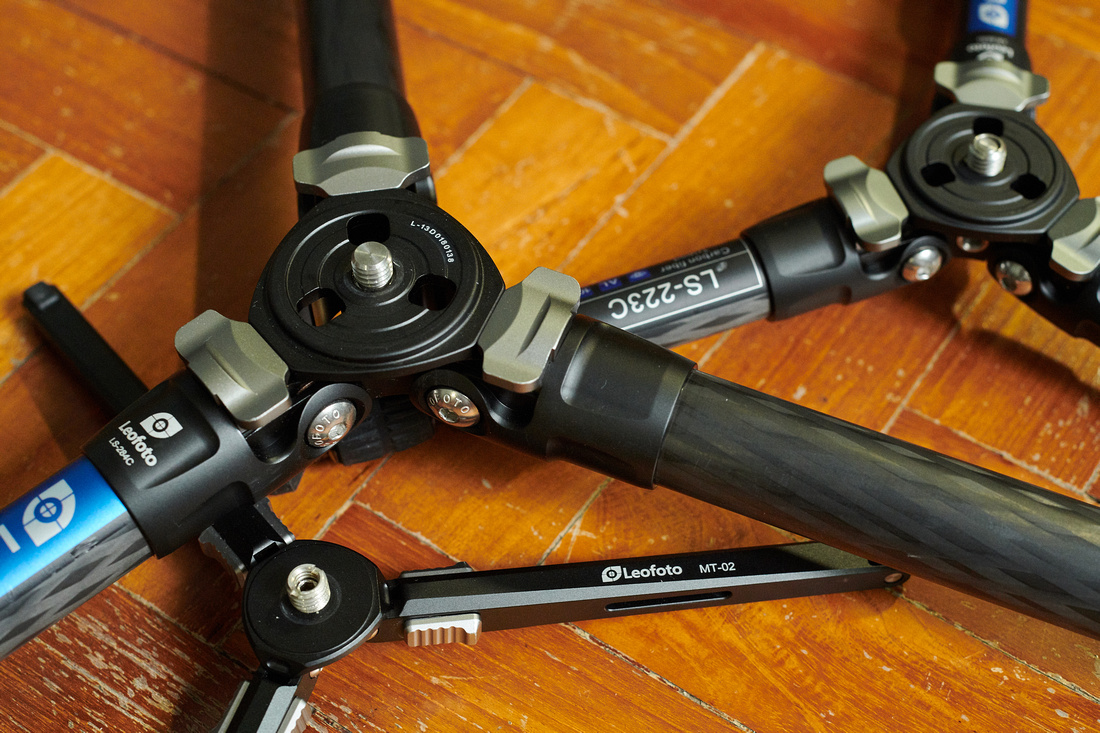 Low-angle capabilities of the LS-284C with other Leofoto products

Unlike similar travel tripods which include the centre column in their designs, the Leofoto by default does not come with one attached. This allows landscape shooters to quickly drop to a lower angle when desired, instead of having to invert the centre column and the camera in other tripods, which can be a cumbersome and unwieldy affair. Pictured here next to the LS-284C are the Leofoto MT-02 tabletop tripod and the LS-223C mini tripod, both of which goes slightly lower and have a smaller footprint when fully splayed out. 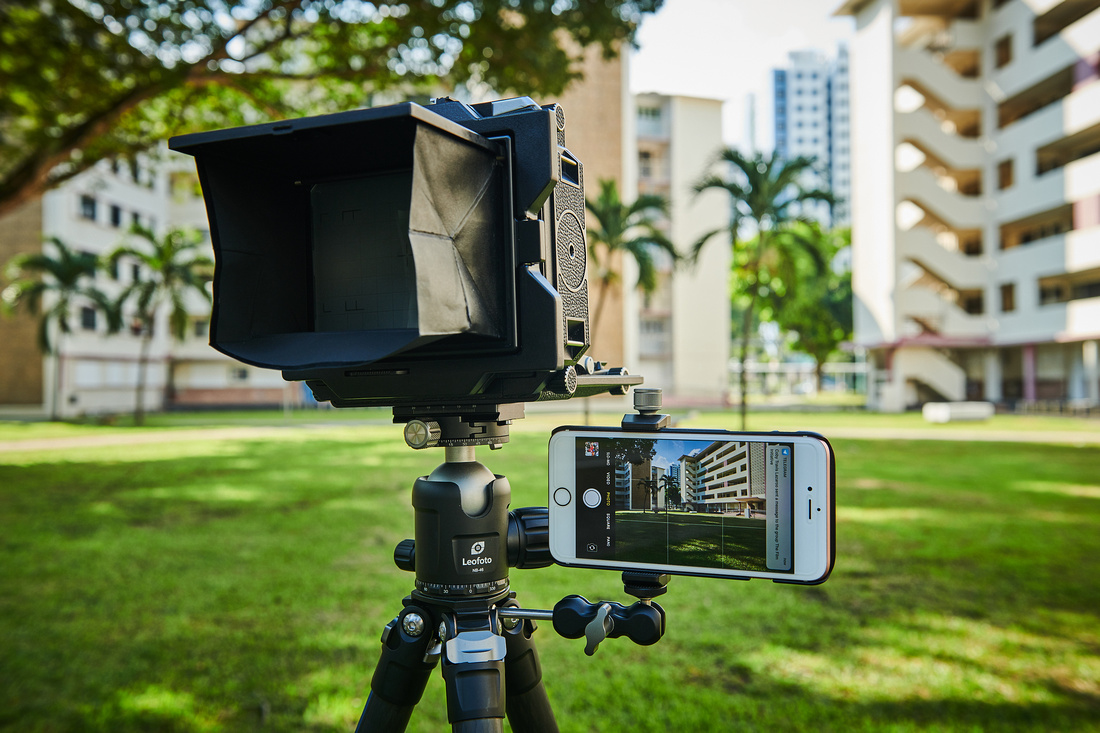 The NB-46 ball head included in my review kit is rated up to 30kg and has a large 46mm ball for better friction and control. At 553g, it is slightly lighter than my full-sized Arca-Swiss Z1 ball head, but has a smaller diameter, making it a good fit with travel-sized tripods. Paired together with the Leofoto legs, the entire set-up weighs in at around 1.7kg, but makes for a light and sturdy set-up capable of holding my large format Horseman 45FA camera and my mobile phone when splayed out properly on flat ground. The ball head also comes with a small built-in Arca-Swiss-compatible panoramic clamp, something that I quite appreciate especially when grabbing panos on the fly. With the panoramic clamp, one can easily centre the ball head to ensure a seamless and level pan in the horizontal axis, which is perfect for quick single-row panoramas. 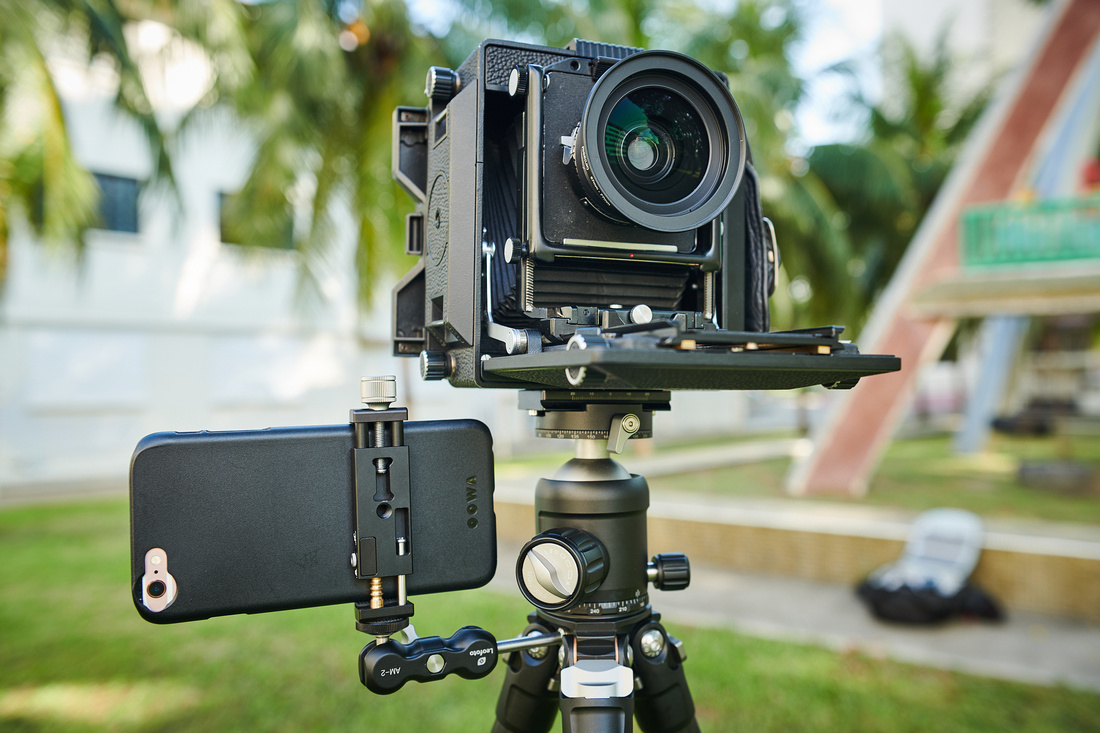 Frontal view of the set-up above

Like with any other Arca-Swiss-styled ball head, it features a main adjustment knob with tension setting and a pan adjustment knob. While the main knob is easily adjustable and locks lightly without much creep, I like that the friction setting can be easily adjusted with the big twist-handle. Most other ball heads of such styles require users to fiddle with a small thumb-screw to set the friction, which can be a clumsy affair. The friction setting is locked in securely in this manner as well, since the handle has click-stops built-in to prevent any accidental resetting. The knobs on the ball head are however made purely out of metal, so they may bite into your fingers when adjusting, which can happen especially in colder climates.

The tripod comes with a 1/4in screw attachment on the apex, allowing users to mount accessories like the AM-2 friction articulating magic arm and the PC-90 phone clamp. This is particularly useful if you wish to shoot timelapses from your phone while shooting with your main camera mounted on the tripod, but do not wish to pack another tripod separately for this function. The phone clamp can extend from 56mm to 90mm, easily accommodating most smartphone sizes. Check out the clamp here on PhotosphereSG's online store. 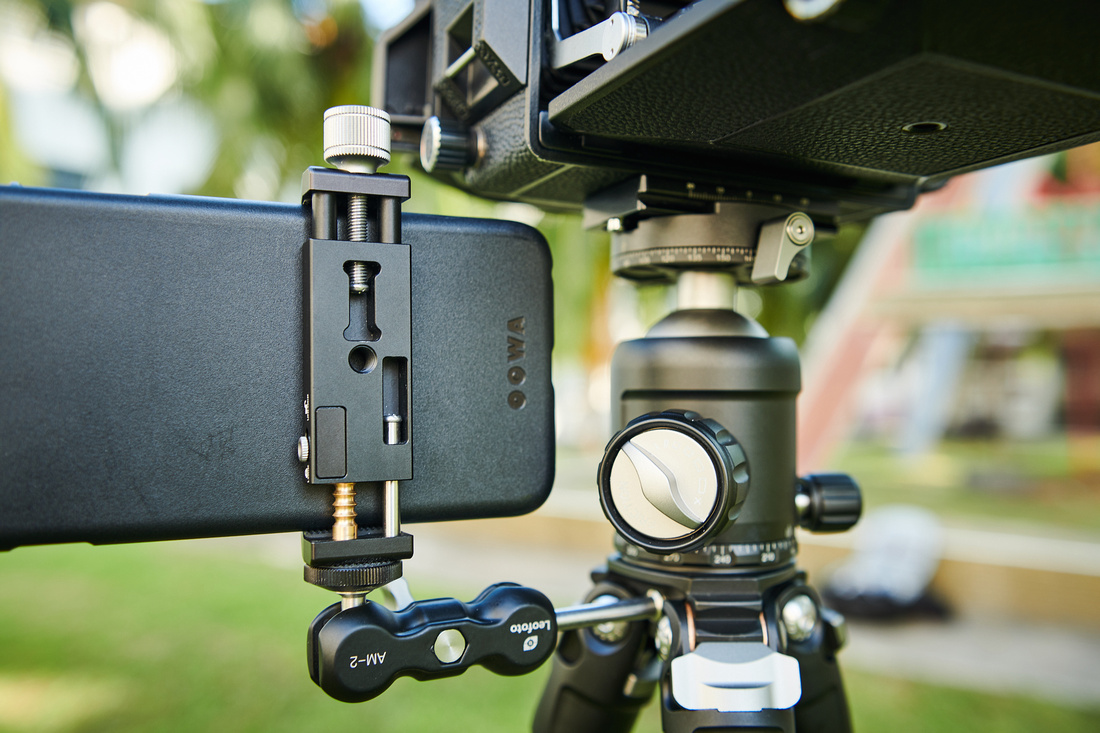 My iPhone 6s Plus mounted on the PC-90 phone clamp

The Leofoto LS-284C is styled very similarly to the Really Right Stuff TFC-14/TQC-14, extending to around the same height and weighing in around the same as well. However, the Really Right Stuff variants cost four times as much as what Leofoto is asking for their version, so how do they stack up? I headed out to one of Singapore's swampiest beaches to see how it fares in water, and in ease of maintenance after. Local landscape photographers would know that Kranji Beach is not for the faint of heart with its almost quicksand-like mudflats at low tide. Such a test would give me a good idea as to how the tripod will perform in less-than-ideal conditions, and if there will be issues assembling the tripod after taking it apart for cleaning. 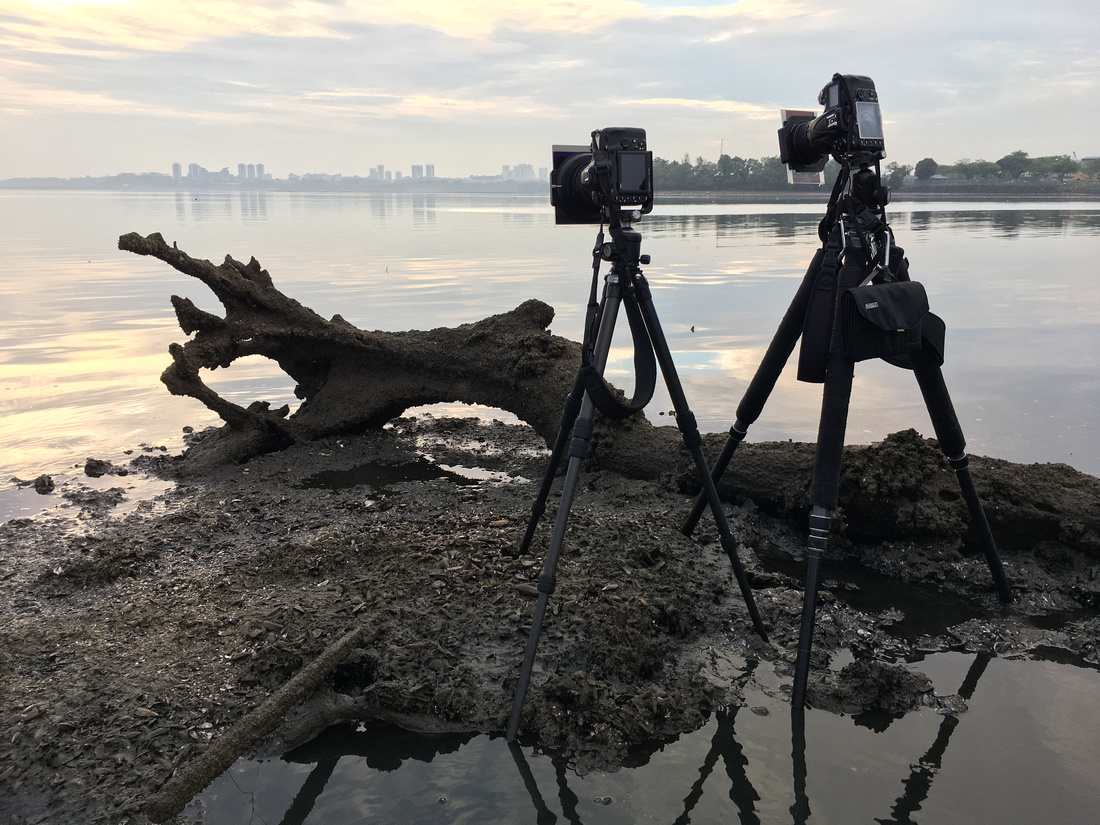 My Leofoto set-up pictured here with my friend's Gitzo

Despite the punishing conditions my Leofoto was subjected to, it still held up well. Still, being a small tripod, I had to jam the legs deep into the mud to achieve good stability. However, that's just one of the trade offs when using a smaller set-up, and most importantly, the tripod didn't wobble or dislodge due to movement in the water. I was able to pull off the long exposure shown below using these set of legs. As you can see, there's no blurriness due to shifting in the sand/mud, which can happen on lesser tripods when subjected to similar conditions. 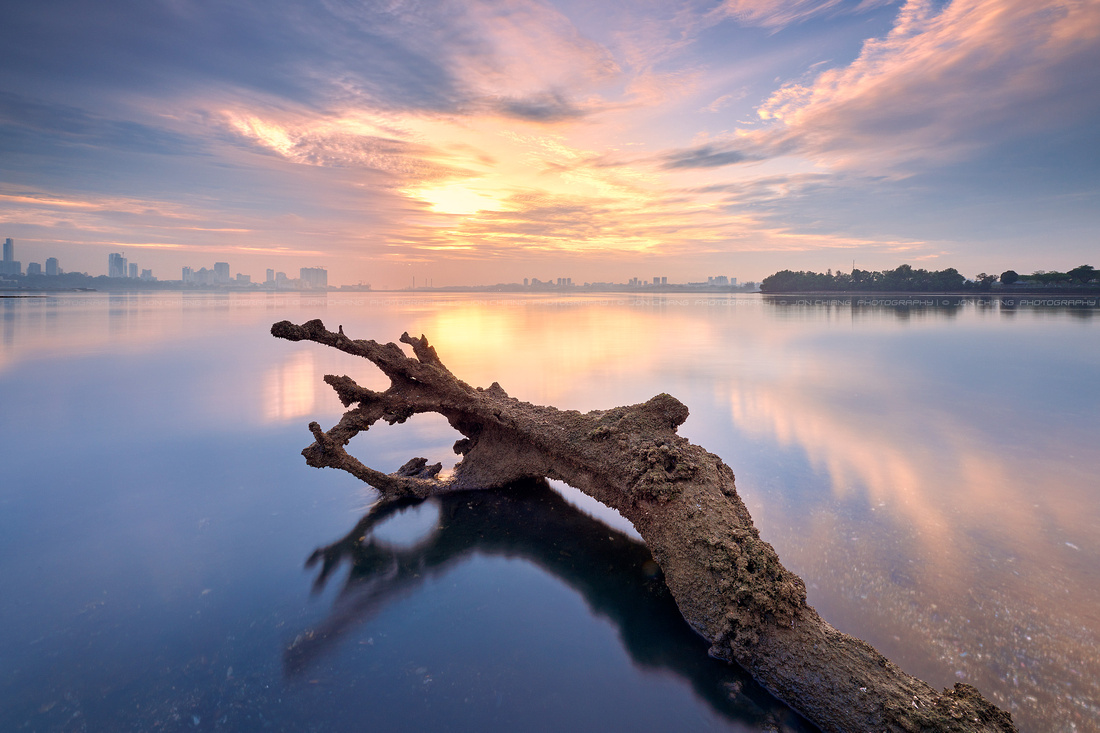 In a similar instance, this panorama at Bishan Park had to be made with the tripod immersed in the running stream. The tripod performed well here with no vibrations or shifting, and the resulting image is sharp and clear on a high-megapixel camera like the D850. 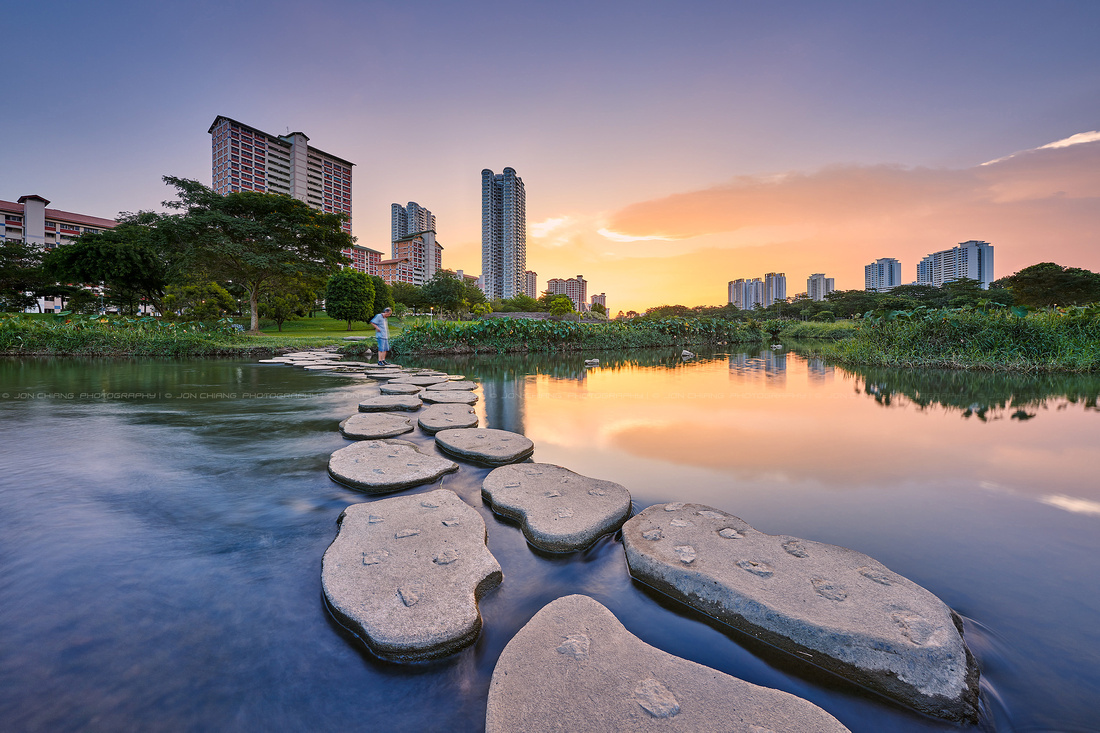 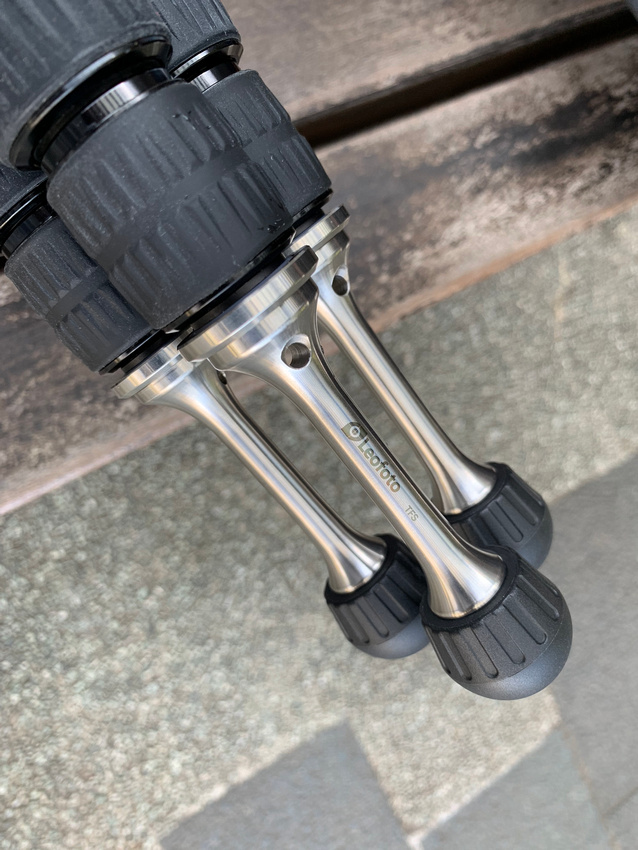 After putting my Leofoto through that ordeal, I had to strip the tripod apart to give it a thorough rinsing with fresh water. This helps to prevent saltwater corrosion from happening, which can even eat into aluminium especially at places where the anodised coating is worn. Disassembling the tripod is a relatively straightforward and hassle-free affair, especially if one is familiar with the design of Gitzo or RRS tripods. 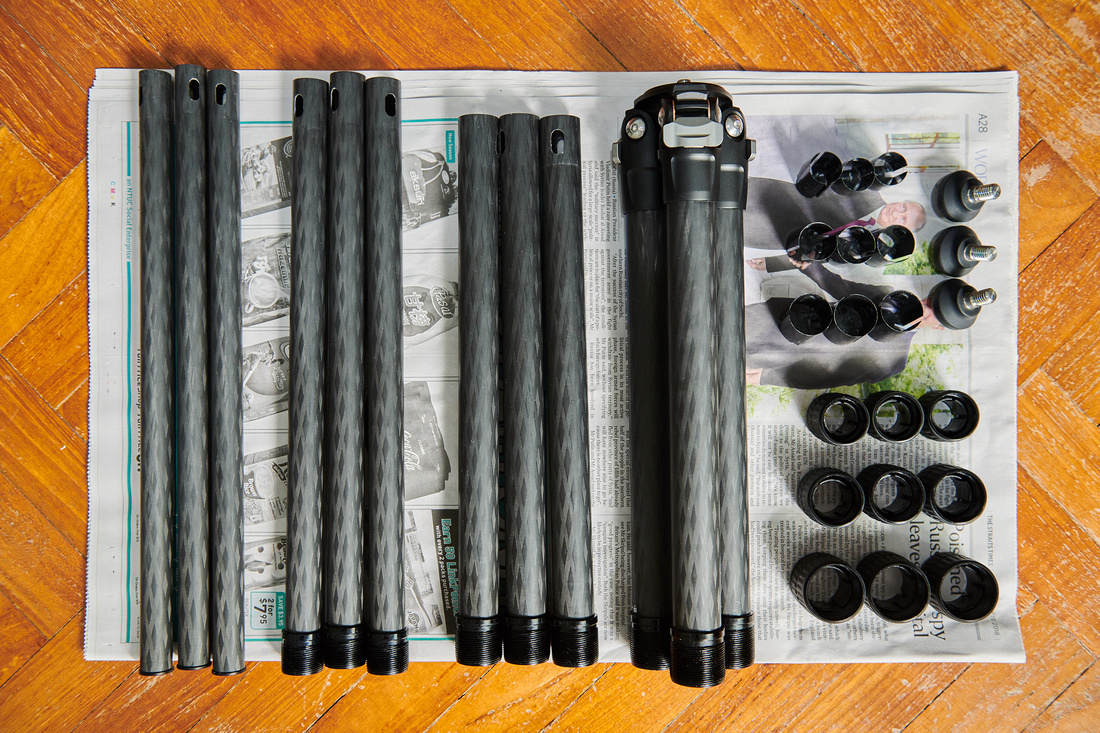 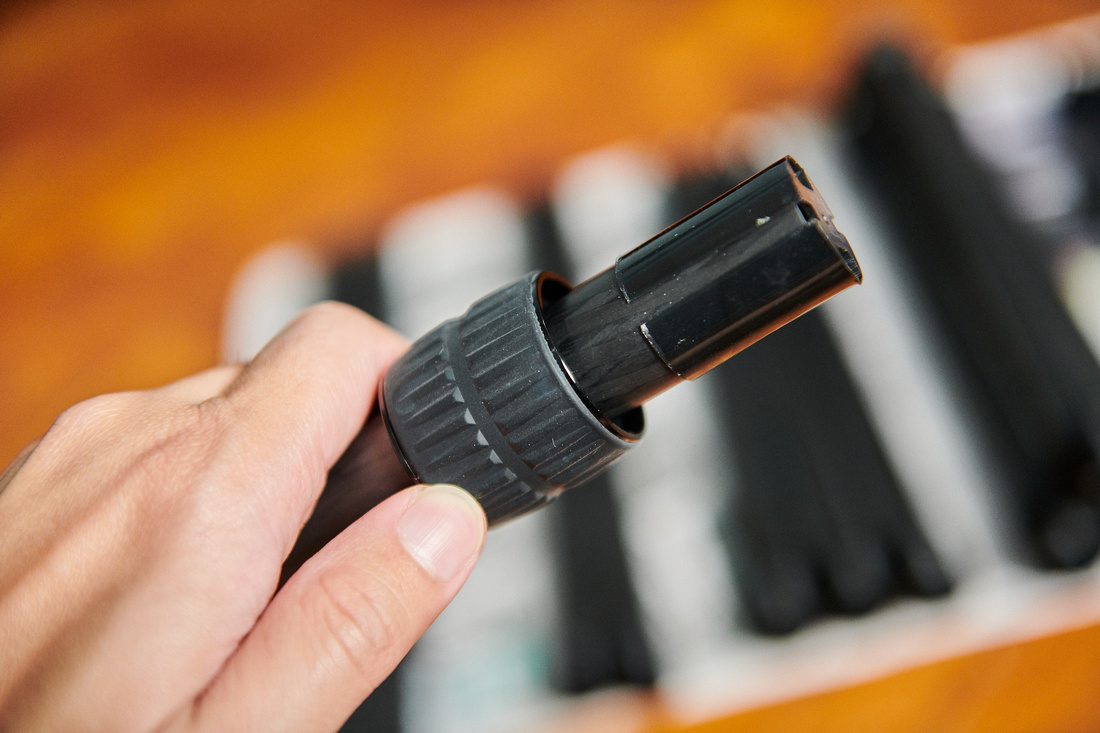 Just like the designs of its Gitzo and RRS counterparts, the Leofoto has a plastic shim that needs to be aligned with the bigger leg section in order for them to fit properly. However, the Leofoto's plastic alignment sleeve actually snaps into place with the carbon fibre tube, preventing them from misalignment or dropping out. This is good because such sleeves are the ones that usually go missing in such tripods. Still, the plastic used by Leofoto is not as sturdy as I would expect them to be, and seems brittle. Take care not to use too much force when removing them for maintenance, or they may snap. 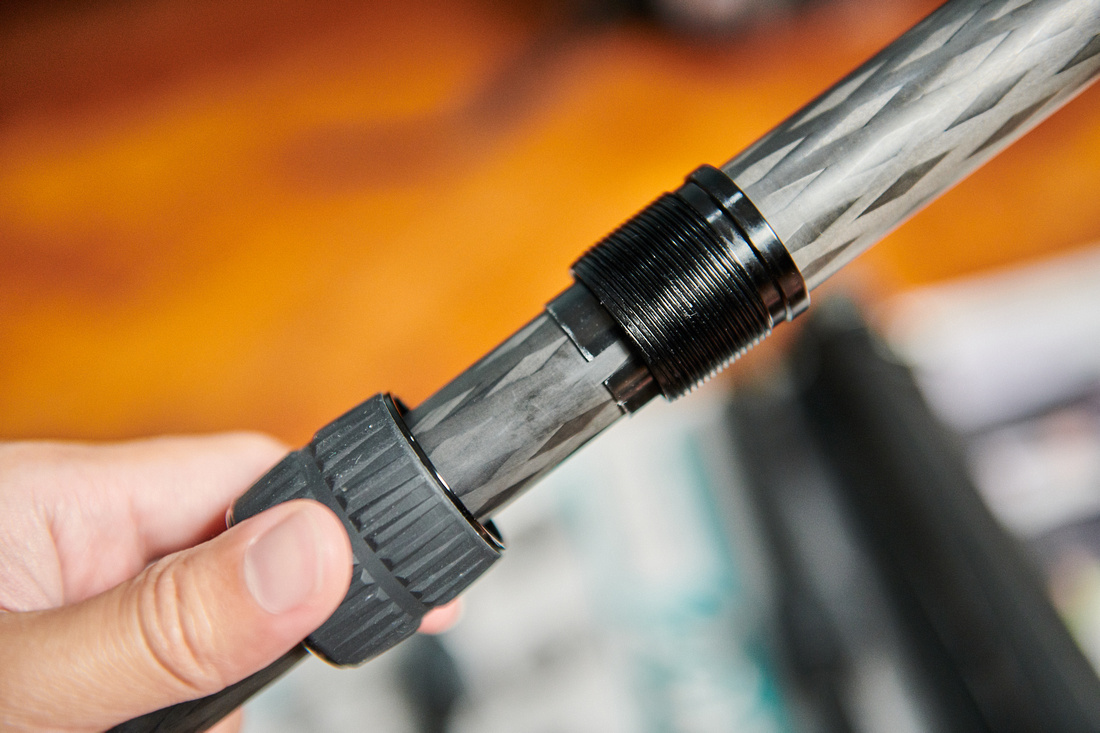 Aligning the pieces back together for assembly

While it definitely doesn't match up to a Really Right Stuff TFC-14 travel tripod, the Leofoto LS-284C isn't meant to replace a sturdier set of legs and in fact comes very close to its Leofoto and Gitzo equivalents. This is further verified in The Centre Column's travel tripod ranking chart here. The Centre Column is an independent tripod review and testing blog that conducts, quoting from them, "quantitative, repeatable, comparative, and directly relates to the real world performance" of different tripods they have tested. Using accurate tools and measurements, they have gathered different performance metrics for different brands and models of tripod legs, and the Leofoto LS-284C ranks fourth on their travel tripod comparison chart, just behind its Gitzo and Really Right Stuff variants. This is an admirable feat considering those other options cost up to four times as much, but do not offer four times better performance as compared to Leofoto, giving this particular Chinese tripod making brand a very impeccable price-to-performance ratio. 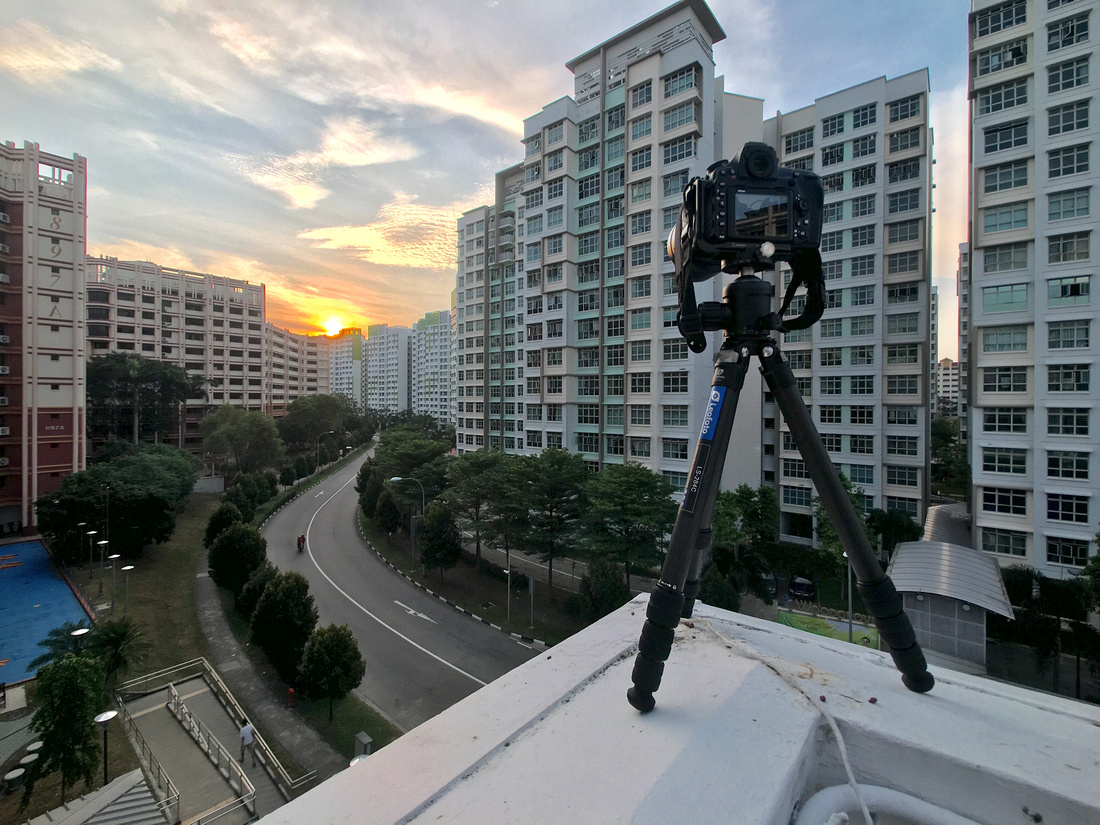 This Leofoto tripod and ball head combination has been a joy to use, and surely did not feel in any way cheap when compared to other more established brands. Although some areas could be improved, like more sturdier plastic shims inside the legs and more scratch-resistant anodising, the tripod offers great value-for-money in a small and light, but yet sturdy (for its size) package, with great design to boot. Everything from the accessory mounting port at the apex to its black-and-silver design accents seem very well thought-out, which should please most travel photographers looking for a set of decent legs, but do not want to break the bank. I'd definitely recommend this tripod to anyone looking for a reliable support system, especially to complement a mirrorless system.

You can view Leofoto's range of travel tripods at Click Camera at Centrepoint Orchard, or at MS Color at Ang Mo Kio. Alternatively, you can check out online distributor PhotosphereSG's range of Leofoto products on their website here.

Jon Chiang Photography
Thanks for your comment! While I don’t have the Pentax 67, the Leofoto LS-284C holds my large format Horseman 45FA without issues. That said, it only feels stable on level ground. If the terrain is uneven, I’d still rely on my bigger Really Right Stuff tripod for stability.

Build-wise, the Leofoto is good but the plastic shims within the twist locks could be better improved. Gitzo should offer a superior build quality in this regard. I think for both the Leofoto and Gitzo models you brought up, they should perform similarly and both should be better suited for lighter payloads, especially in a travel scenario.

If you are on a budget, I’d recommend going with the Leofoto as you get quite a lot of bang for your buck here, however, Gitzo or RRS will always offer a superior build quality. Hope this helps!
Xavier(non-registered)
Hi Jon, really helpful review. Just one question - I'm torn between getting this tripod or the Gitzo GT1545T. Will be using it for travel and my heaviest camera is the Pentax 67II with the 105mm f/2.4 lens. Will this tripod be good for me? Looking forward to hearing your thoughts, thank you.
No comments posted.
Loading...
Subscribe
RSS
Recent Posts
H&Y 100mm Magnetic Filter Solution Review ft. Laowa 15mm Shift Hoya Starscape Light Pollution Cut Filter Review Developing 4x5 large format slides at home with the Unicolor E6 kit Panasonic S1R Review Hands-on with the Ricoh GR III Chasing Lightning Haida Red Diamond Nanopro Filter Review BenQ SW271 4K UHD PhotoVue Monitor Review (Not Recommended) Leofoto LS-284C Tripod Review Haida Clear Night Filter Review
© Jon Chiang
Powered by ZENFOLIO User Agreement
Cancel
Continue