Picking up from the success of Haida's Nanopro line of filters, the filter company's latest line of Red Diamond filters promises all the previous advantages of the Nanopro filters, in addition to being up to twice as strong as conventional glass filters. Engineered to be the toughest line of filters in Haida's current offerings, the Red Diamond features a shock-and-scratch-resistant design, making them ideally suited to the harsh challenges of outdoor landscape photography.

As a landscape enthusiast, I was naturally intrigued by the new design, and was pleasantly surprised when Haida approached me to write a review on these new toughened glass filters. In the past, I preferred using resin filters as they were tougher than glass filters in the sense that they readily withstand impacts, whereas glass filters will shatter when dropped. However, resin scratches easily, which may cause flaring issues in the long run. The Haida Red Diamond series seemingly addresses both problems and offers landscape shooters the best of both worlds. The filters arrived in Haida's now-standard padded metallic tin case, and on first glance, looked almost exactly like their standard Nanopro range of filters. Apart from the etched 'Red Diamond' wording on the top of the filter and the slightly more rounded corners designed to make them easier to slip into filter holders, the Red Diamond and Nanopro are similar in all other aspects. Like the Nanopro, the Red Diamond also includes Haida's superb Nano coating, which helps to reduce vignetting, flare and unwanted colour casts, something which I greatly appreciate with my Haida filters. 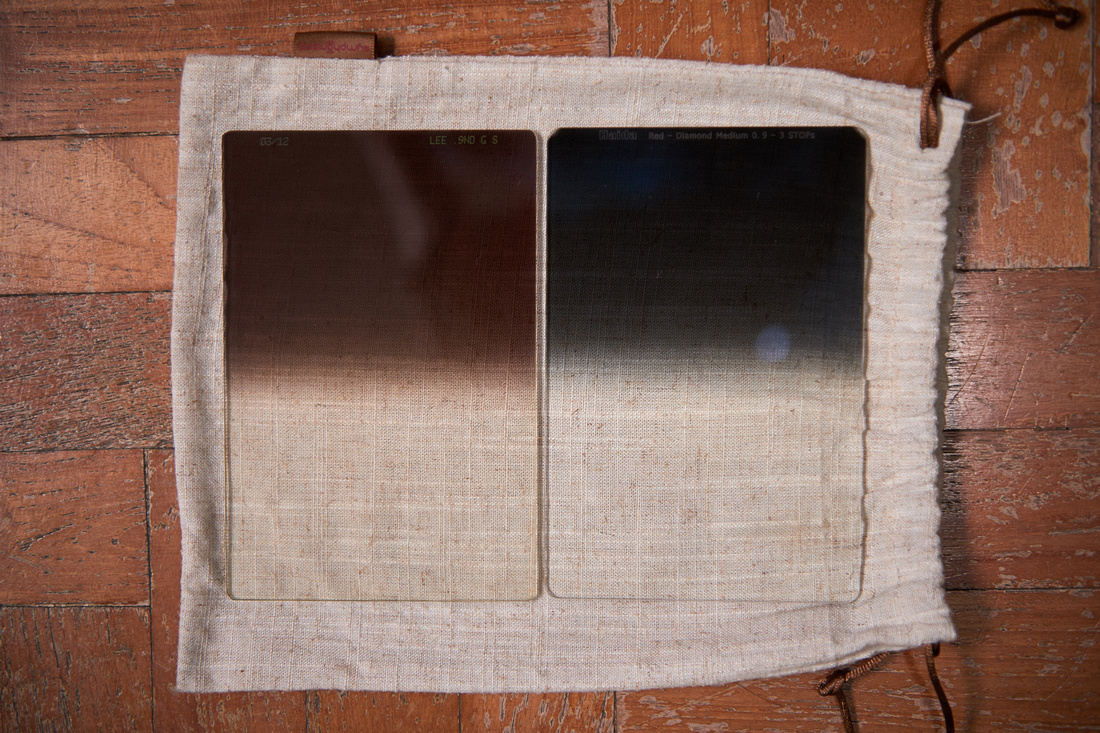 Compared to my Lee 0.9 soft grad resin filter, the Haida Red Diamond glass filter does not exhibit any colour casts at first glance, whereas the brownish cast on the Lee filter is very apparent from the photo above. That said, I have been using my Lee filter for years, and the brownish discolouration could be due to age. The use of glass as opposed to resin for Haida's filter products should also yield a more resilient filter which should not discolour with age. 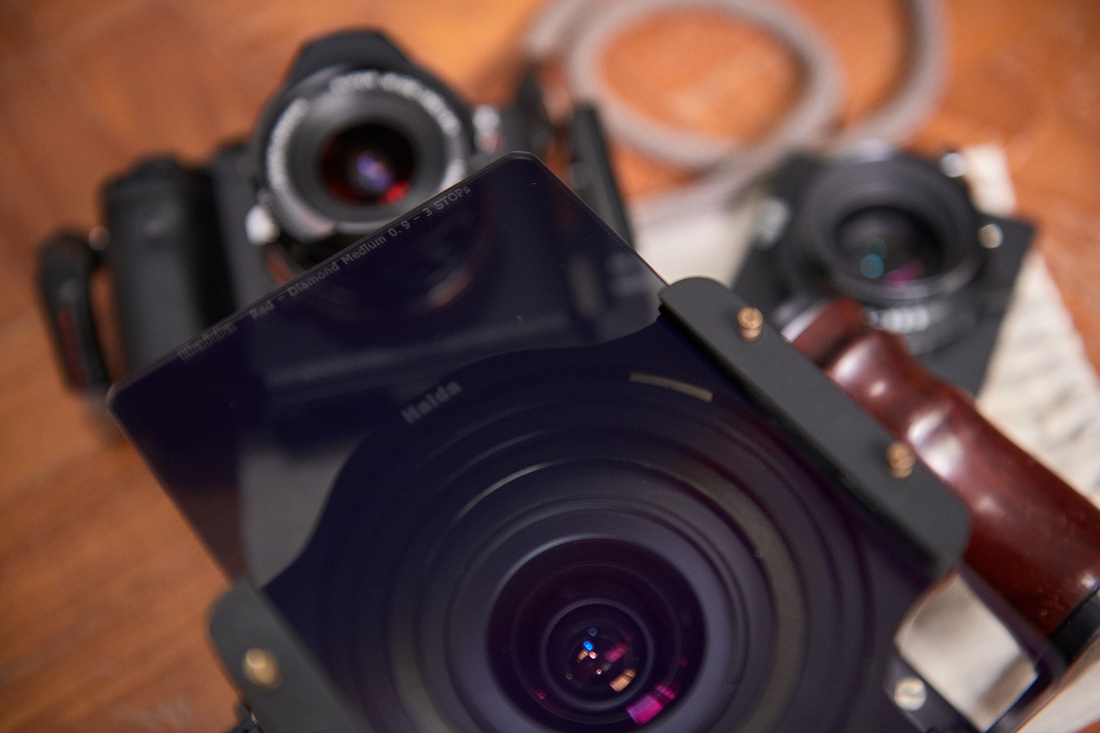 Installing the filter is also much easier with the rounded corners - a small but well-thought-out design feature of the new Haida filters. 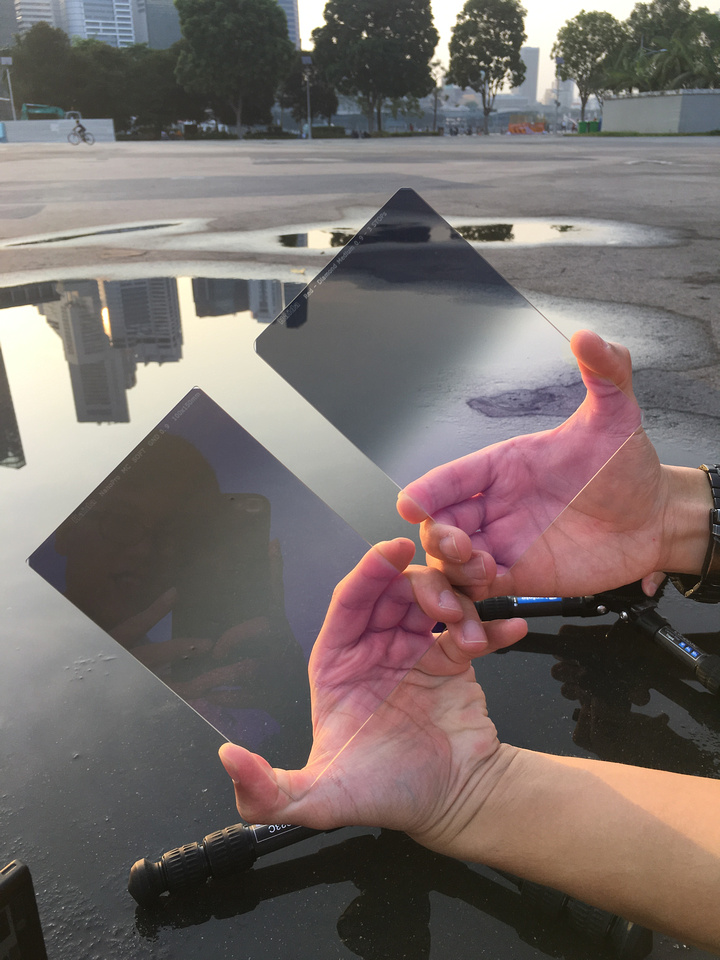 The nano coating on the Red Diamond also helps to repel dirt, oil and water, which used to be a nuisance on my resin filters. With my Haida filters, I can easily wipe away debris with my shirt and continue to shoot with it, unlike conventional resin filters which require a good wipe with cleaning fluids and microfibre cloths. This is especially crucial when shooting in rainy conditions or shooting seascapes, where sea spray is oftentimes a concern. The bluish-purplish tint on both the filters in the photo above is a result of the Nanopro coating, and have no discernible impact on real-life results.

It's also good to note that despite the new processes used to toughen the Red Diamond filters, the filters still exhibited Haida's best-in-class colour neutrality and light transmission. Images taken with the newly-launched filter showcased a lack of colour cast, similar to those taken with the Nanopro range of filters. From the comparison shots below, it is evident that the 3-stop graduated top portion of the Red Diamond filter cuts down sunlight significantly, which is vital for controlling highlights in the sky for landscape photography in order to get a well-exposed photo. 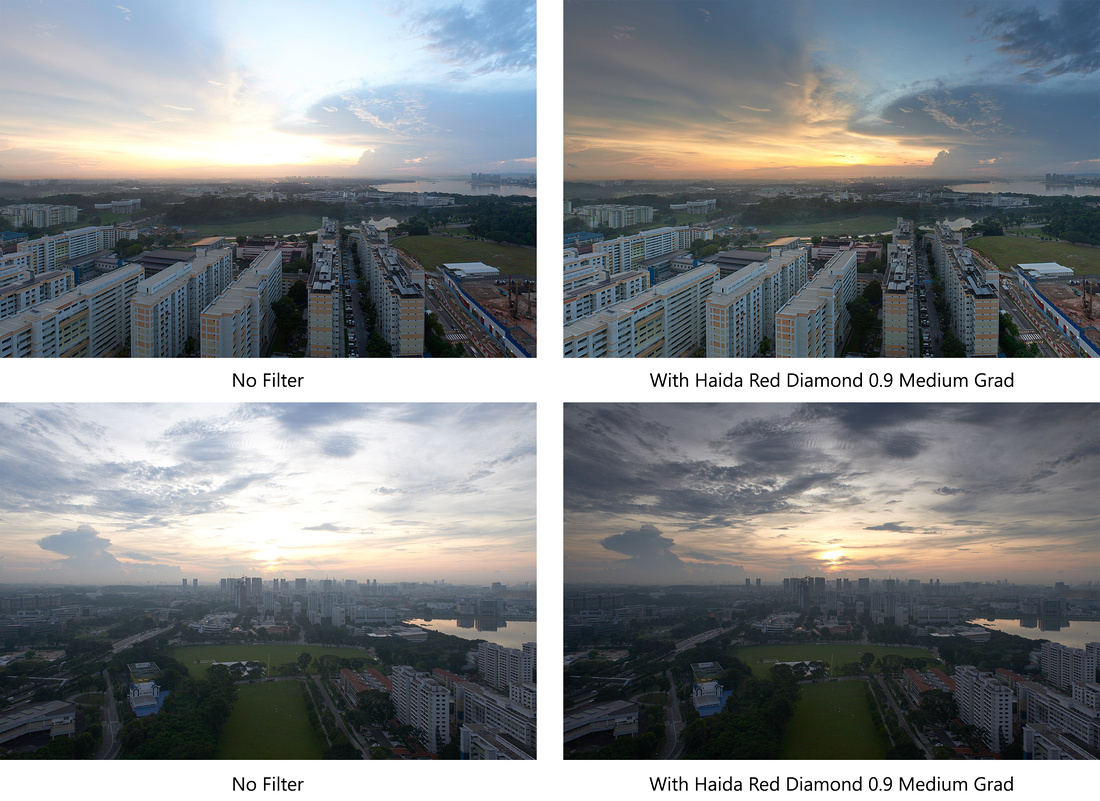 Testing the new filter on some cityscapes yielded very promising results, and it would be interesting indeed to use the filter for seascapes, which would be a good environment to test the filter's features. A drop test would definitely be interesting as well, to see how such a filter handle accidental impacts in the real world.

As such, I made some comparison shots with different Haida-branded 6-stop neutral density filters (the original Gen 1 filter, the Nanopro and the latest Red Diamond) to see how much they differed from each other. The test was done at Punggol Beach, as I figured that seascapes would be best to showcase the filters' effect of slowing down shutter speed and extending exposure time for smooth water effects. 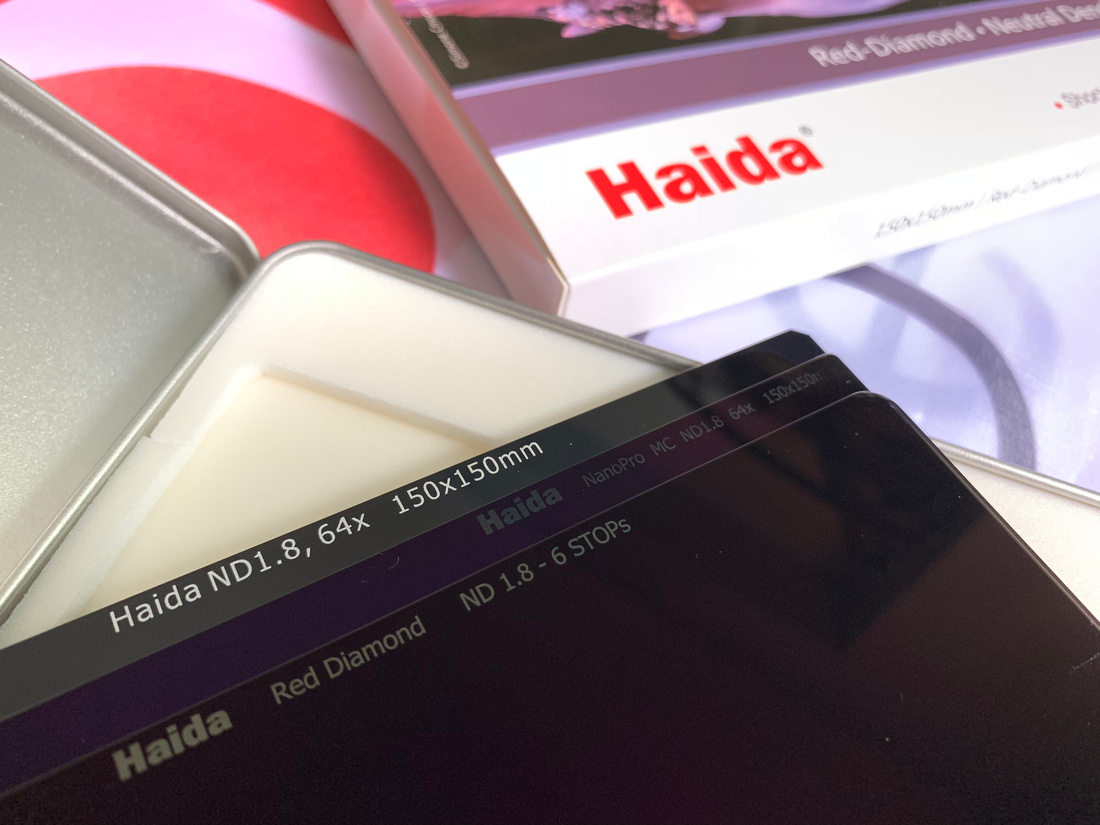 Real-world use in seascapes 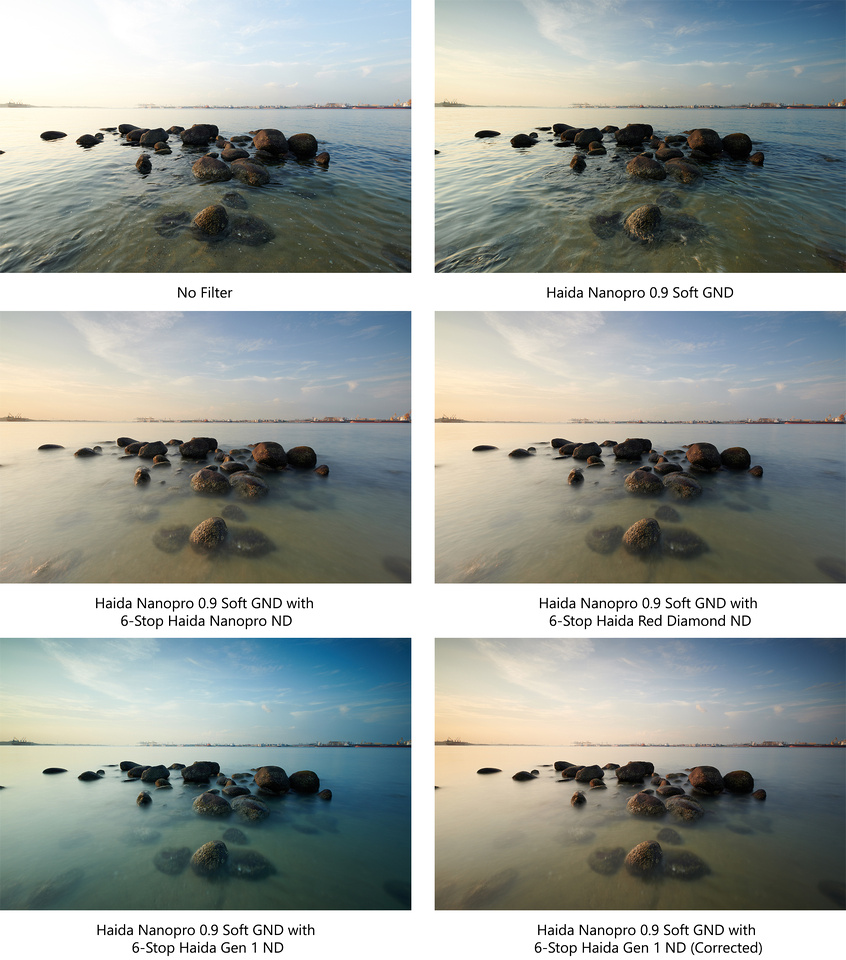 From the comparison above, it is apparent that the Nanopro and Red Diamond filters have little to no colour casts, whereas the first-gen Haida 6-stop filter exhibits a bluish colour cast and a strong vignette. However, the cast can be easily corrected with a white balance tool in an image processing software, though the same can't be said for the vignette. More comparison shots can be seen in an earlier review here.

The Haida Red Diamond filter series indeed builds upon its heritage by offering increased durability and toughness with its shock-resistant construction. At the same time, the new filters offer existing features from Haida's Nanopro range with their nano coating that repels dirt, oil and water, excellent light transmission characteristics which reduce vignetting and true-to-life colour reproduction with their extremely neutral colour rendition. Photographers will be glad to note that they will not be losing out in any of Haida's famed optical performance when using a Red Diamond, and yet be free of worry from accidental drops and knocks that may happen out in the field, making them a valuable piece of kit for any landscape enthusiast. Multi-row panorama with the Nikon 24-70mm and the Haida Red Diamond 0.9 medium grad Single-row panorama with the Nikon 24-70mm and the Haida Red Diamond 0.9 medium grad Single-exposure with the Laowa 12mm and the Haida Red Diamond 0.9 medium grad 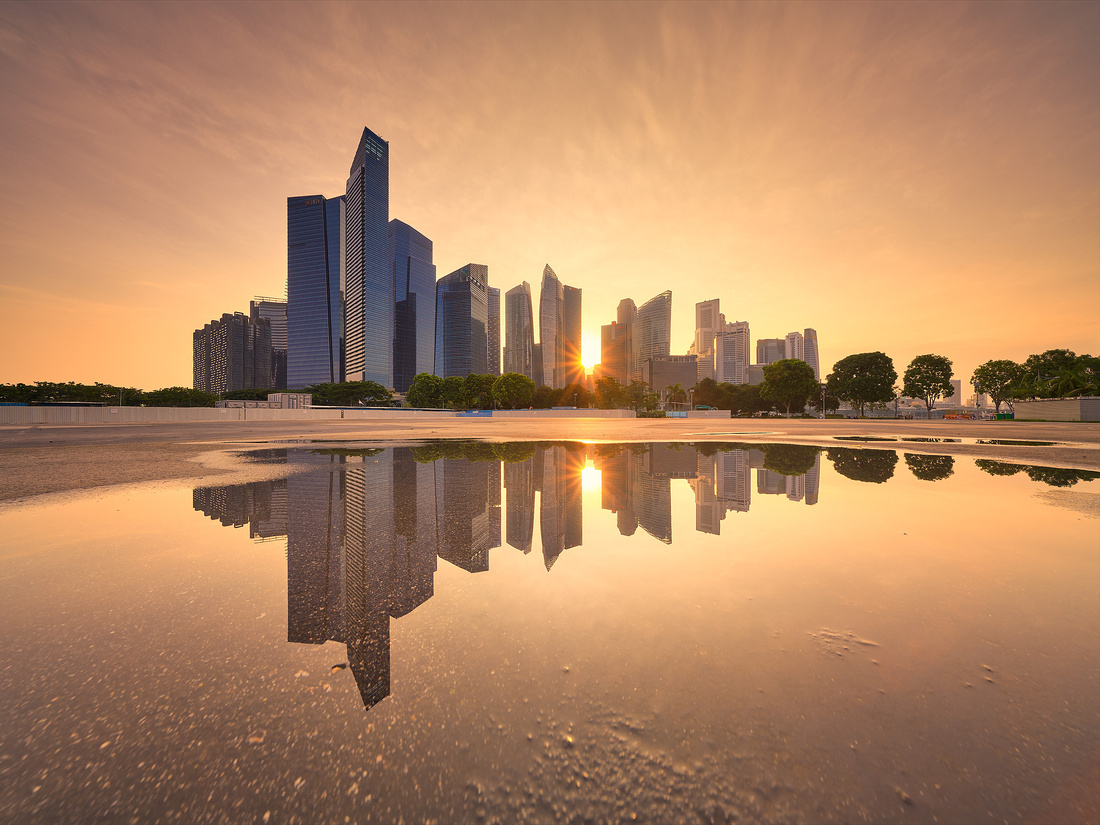 Single-row panorama with the Laowa 12mm and the Haida Red Diamond 0.9 medium grad

Jon Chiang Photography(non-registered)
Thanks for your comment! I've not compared the Haida filters I have with Nisi, but both are made of glass and should be more resistant to scratches as compared to my old plastic Lee filters. The Haida Red Diamond comes with the added benefit of being toughened, so they are more drop and scratch resistant than the older Haida glass filters.